North Texas Celtic Strings is educational music program for kids of all ages! We started at the fall of 2022, currently on our spring semester and we are happy to announce our fall semester 2023! We need more students! If you play violin or how we call it fiddle, viola or cello you might be interested to sign up for Celtic String Ensemble this Fall!

Please check our FAQ section. Here is our Facebook page.

We are learning Irish, Scottish, Canadian and American tunes * in different genres with special technique like rolls, triplets, grace notes and much more. We are not limited to learn only tunes, but groove and chords to be able to support each other and accompany melody! We will learn by ear and it’s great opportunity for ear training!

* Some of the tunes we learn adopted into American Traditional Music.

Information about the class

Location and date of the recital will be posted soon!

There will be no classes during Thanksgiving week, November 25.

December 9 will be the last class and Recital will be on December 11 week (TBA), which will be the end of the Fall semester.

If you choose video submission – please submit piece/tune of your choice in a medium to fast tempo (Youtube link, Google drive or DropBox). Click orange button below.

What kind of music is it?

So it is instrumental compositions, tunes, historically mostly played for dances and nowadays can be played as concert pieces! Slow tunes  though, more like songs played on instrument.

Tunes are usually grouped in the set of same genre, sometimes mixed genres.

And then usually played as the set, not each tune individually. Separate tune composition is common for slow tunes or special music arrangement.

I'm the beginner can I participate?

Most of the time it could be very confusing and stressful to be in the program if you are the beginner. Maybe instead we can start private lessons first, focusing on proper holding and playing simple tunes, learning basics.

I'm confused about uploading video, can you help?

Absolutely! We have different options:

Do you provide any music sheet?

The goal is to teach kids to play by ear. So we don’t use music, instead we train our ears in the class. In this way it is better to hear and reproduce all the details needed for Traditional music.

* Sheet music could be provided later in the program if needed. Just keep in mind that in this kind of music it’s just a skeleton, reminder of the notes and rhythm without any further details. Here is an example: 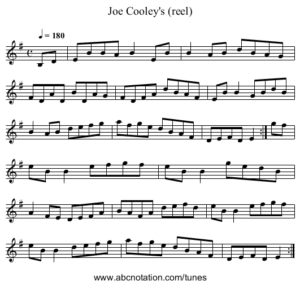 How many tunes you cover per semester?

We usually cover about three sets of music. Sometimes more. It is about from 7 to 10 tunes.

What is the output?

We play recital at the end of each semester. Location is different for each semester (north part of DFW area. Richardson, Plano, Allen or McKinney). It’s being recorded and you will have your copy as well. Also it is supported by the band, so kids can experience the real feel of traditional music community on the stage!

How can I pay?

We have different options. Zelle, PayPal, checks and cash.

If you have any question please use WhatsApp button at the top or using this form.